Do you ever have those days where things fly by so quickly that you aren’t sure if you were dreaming?? I had one of those this past Saturday. If it weren’t for the over 650 photos I took, and nearly that many mosquito bites on my legs, I might actually be fooled into thinking it never happened. On Saturday, June 21, 2008 two of my close family members were married – and NOT to each other. LOL! My neice was marrying her beau of three years in the Cardston, Alberta Temple on Saturday morning, following which my husband’s baby brother was getting married to his sweetheart in Calgary, Alberta that afternoon, FOLLOWING which my neice was having her reception in Calgary that evening. And guess who was the lucky gal who got to photograph all the events? You got it. Man, there is nothing like it – I LOVE IT!

So, we live about 7 1/2 hours away from either of those locations and we couldn’t leave until after my husband got off work on Friday evening. We drove directly to Cardston with very few incidents besides NONE of our children sleeping any part of the way there, and arriving just after midnight at a motel. I won’t tell you what I found crawling in my sheets, I was too tired to care. I knew it was going to be a busy, busy day the next day. I tried to sleep the best I could on the seemingly plywood mattress, then woke up bright and early to my sweet children laughing and giggling in the next room at 6am. Ugh. We got up, got dressed up, had some breakfast then headed over to the temple. Of COURSE I had to take a photo of my girls in front of the temple. 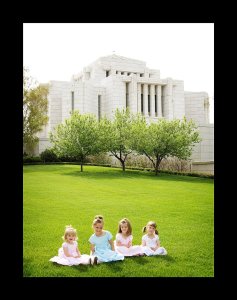 I was able to witness my neice and new nephew be married and sealed for time and for all eternity in the temple, with about 8-10 other close family members. It was a very beautiful, sweet ceremony and I was so glad I was able to be there for them. There is nothing more beautiful than a marriage sealing. I love to hear the covenants they make with their Heavenly Father, and to hear the promises He makes in return. It brings back memories of my own marriage and it’s always a wonderful thing to be reminded of. They both looked radiant and so, so happy. 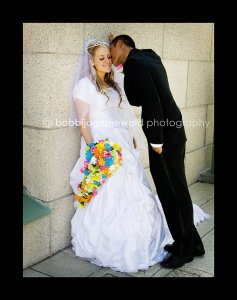 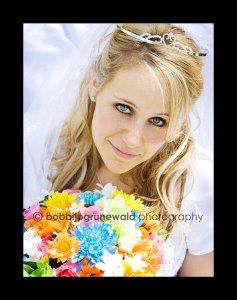 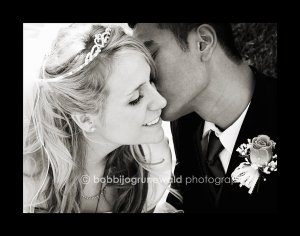 After an hour of taking photos with masses of friends and family gathered around taking photos as well (doesn’t bother me any), we had to rush, rush, rush to get to Calgary in time to change our girls into their flower girl dresses and get to MacKenzie Lake for my brother-in-law’s wedding. I was looking forward to a couple of hours of quiet (quite certain my children would fall asleep during the drive) but was serenaded with singing, laughing, some fighting, and absolutely no sleeping children! DOUBLE UGH! I knew we were in for a fun afternoon of tired and cranky children.
We arrived in Calgary with time to spare and changed the girls into their gorgeous flower girl dresses. We then made it to the lake house in time to visit for a few minutes before the ceremony began. It was doubly special because my hubby’s other younger brother was home from spending something like 5 years in China. It was a sweet reunion. He was the best man. The weather co-operated nicely and it was another beautiful ceremony. My father-in-law married them and did a wonderful job. I had never taken photos during a ceremony before, so it was a new experience for me!
Afterwards we took a nice little walk around the lake and found some nice shady spots to take some photos – unfortunately, I was eaten alive by mosquitos! My legs are itching just thinking about it! Any ideas for relieving bug bite itch? Anyway, I think my new sister in law is absolutely stunning – a photographer’s dream. Oh, and my brother in law is cute too 😉

As you can see, there were several flower girls and ring bearers – all the neices and nephews of the bride and groom. This was the best shot I could get… 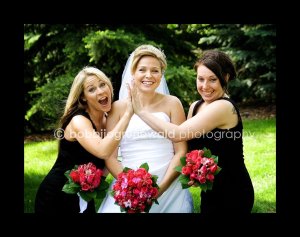 My sister in law and I did our daughters’ hair the same way without even planning it. I think they looked so cute together. These two are only 2 weeks apart in age, and I think they look quite a bit alike. 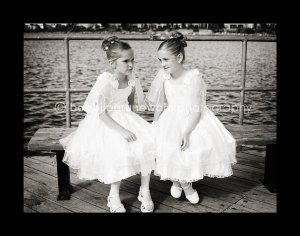 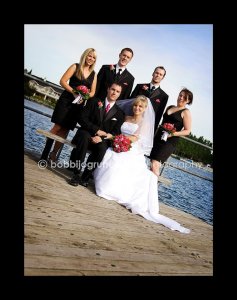 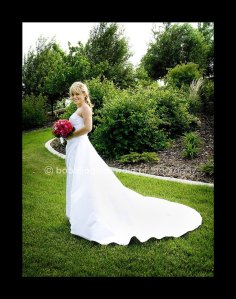 Like I said – isn’t she stunning?!?!? What gorgeous kids they are going to have! 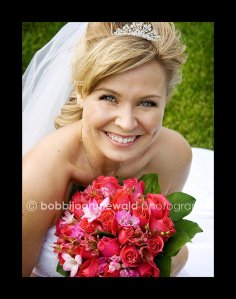 And my brother in law is a weirdo – he wanted this pose…. what is he doing? What is SHE doing?!?! LOL!

We were finished with photos after about an hour and we headed back to the lakehouse for a small reception and some delicious food (a scrumptious stuffed prok loin…oooh delish!). We stayed for a few minutes, TJ sang her “Think of Me” song accapella and it didn’t work very well. She started too, too low and since the song changes keys have way through, she had a hard time with it. She was sure cute singing it, though 🙂

We had to leave early so we could make it to the other side of the city for my neice’s reception, which TJ was singing at as well. We made it just in time to see my brother in the parking lot looking sharp in a new pair of glasses. He looked amazing! It was so nice seeing so many family members and friends there that I hadn’t seen in so long. The best part was having my parents and all my siblings there for a group photo – something we haven’t had done since about 1997 we figured. It was long, long overdue. We tried to smile nice for a decent shot….

…but soon our true natures could no longer be concealed… 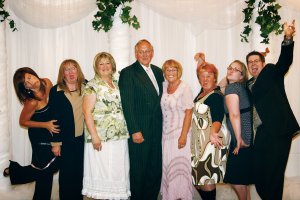 We had such a blast together. Oh, I miss getting together with my family. We are not perfect, we don’t always get along the best, but there is nothing in this world we wouldn’t do for each other and for the most part we have a crazy fun time together. My siblings have almost 20 years between the oldest and youngest of us, but when you’re siblings age doesn’t seem to matter as much. Boy, it was good to see them. I saw several other friends and family members – my grandma (only living grandparent) was there, my other neices and nephews, my friends and cousins from my old wards, oh the list goes on.

The reception was lovely – a nice program, absolutely stunning decorations (made by my sister), and the food was phenominal. I wish I had saved some room for all of the delicious Cantonese food the groom’s family hand prepared themselves. I tried a springroll and it was divine! Oh mercy!

We stayed until about 10:30pm then made the 25 minute drive back to my in-laws house to stay overnight. We got the girls tucked in and I was out in minutes. I was so tired!

Sunday was equally wonderful, seeing many old friends in my in-laws ward (so good to see you, Staccey!) and then to our good friend’s ward, only to find out that he was being released as bishop that day! What amazing luck to be there on that special day. My husband had served as his counselor in the bishopric for over 3 years, and we gained such a strong love for him and his family. Such great people. It was even more incredible to see our other good friend who had served in the bishopric with them both walk in. It’s incredible because he’s living in Ontario now! What are the chances that the two men who served in the bishopric with this bishop, and who now live out of Province, to show up in his ward on the same Sunday he is being released. We felt it was one of the Lord’s tender mercies. We were SO HAPPY to be there for that.

We had a family dinner at my in-laws, which was bitter sweet because every except my eldest sister-in-law was there together. She was very, very ill and could not even get out of bed. If you want to read more about how she’s been feeling – check out her blog. It sounds terrible, and I’m praying that it’s not too serious, and that the doctors can determine what the problem is. She is such a great woman, and someone I admire. I hate to see her feeling so badly. You would’nt believe the fun gift she gave me for being called as the Relief Society President. I’ll have to save that for another post, though.. this one is already impossibly long.

We travelled home Monday, with nary and incident, which I hope becomes the norm since we have a new van now. As hectic as the weekend was, I was SO glad we made the trip. It was amazing and unforgettable. I was glad to be home, though, after it was all over. There is no place like home 😉

13 thoughts on “A busy, wonderful day of celebration!”