Welcome to my recap of our Twilight Movie night! WAHOO!! I had fun making simple decorations in (what else) red, white, and black. I especially love my welcome banner that I printed off from House of 3 on some scraps of red and white patterned papers. I strung it up on our large living room mirror. 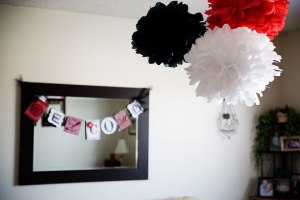 Then, of course, I made some fun tissue paper pom poms (instructions HERE) to hang in the living room. These were HUGE but it’s hard to tell in the picture. I also made some smaller ones to hang from our ceiling fan in our dining room where all the goodies were going to go: 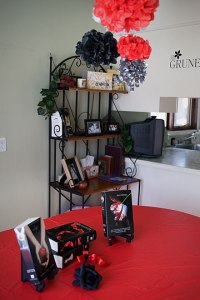 The guests brought their favorite “treat temptation” to share and we had everything from vietnamese salad rolls to chocolate covered cheesecake squares, seafood pizza, and every other yummy snack you can imagine! (LOTS of chocolate, and LOTS of cheesecake – I guess I’m not the only one who can’t resist those treats!).

I made and bought some inexpensive little prizes to give away during our trivia game after the movie. 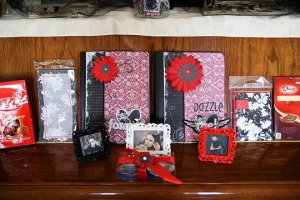 We had a great bunch of girls come – the YW presidency all came (I think it was all of them) which was AWESOME because being in the Relief Society, I rarely get a chance to really get to know them. Those young women are so lucky – these gals are SO FUN! Even one of the Young Women came! She is *almost* as in to Twilight as I am – almost (ha!)

Some of the gals hadn’t read the book OR seen the movie until our party, so it was fun to see what tidbits of trivia they picked up as they watched. I asked a question, and whomever got it right would then pick a prize from the table,OR steal someone else’s prize. Some of the girls were WAY too nice, but there was a bit of stealing going on…

Cass immediately took the wooden apples with Twilight words on them in glitter stickers for her prizes – THANKS TO MY SISTER FOR THE IDEA! I found the apples at a dollar store here in town. LOVE DOLLARAMA! 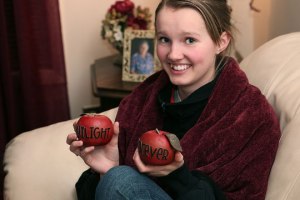 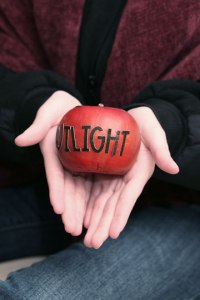 I also made Twilight bookmarks for everyone who came. 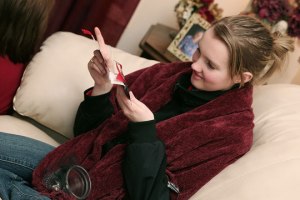 All of us wore red, black, or white (or a combination of all three). Carma ROCKED the challenge with these awesome socks!

All in all there were 7 of us gal there and we behaved ourselves.

…until Ailyn turned into a Vampire… 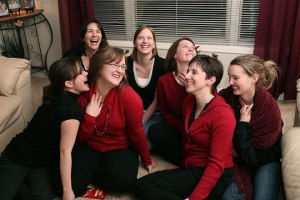 I should have realized she was a vamp from her beauty and fair skin – but then she is pregnant, so that threw me off! I was content to nibble on MY prize – some DOVE CHOCOLATE. Oh, drool!

Thanks, ladies for such a fun time! I hope you are all prepared for the next film to come out because we are ALL going to the theater for another girls night. Just so you know. And if you don’t want to…well… “I could always make you” 😉