It’s a little late, but here is the “report” of our Canada Day July 1st celebration. Was it a celebration? Not sure. I don’t think so. We got up early, cleaned the house, got the kiddos ready and headed out the door to find some exciting things to do around town. We drove past the park in front of the legislative building (that’s where the huge festivities were being held) but nothing was set up yet, so we basically drove around a bit. I suggested we go to the Science Center and check it out, and we decided it was to much money to spend right then. But, they had a super fun, interactive park out front that the kids had a blast on. It was a learning center disguised as a playground – the best kind! 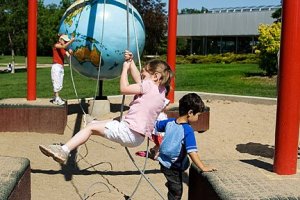 This was one of my favorite parts – you can build a bridge using those plastic blocks, however the fun part was that the yellow one was the “keystone” (holding all the other blocks in place) so it was a neat object lesson that I think we’ll revisit again for a Family Home Evening. I mean, those plastic blocks even held up my hubby. Wow. 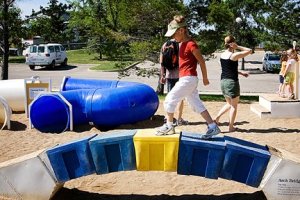 After the Science Center park, we had a couple of errands to run, which is always fun with 4 slightly hyper/crazy children – and which brought us into the lunch hour. We thought we’d eat at (shudder) McDonalds – which is my least favorite place to eat on the planet, I think. It didn’t go well. The kids were acting very greedy, whiny, and all – around spoiled. I was not pleased. To top it off, two of them barely touched anything on their plates. We told them that we were not bringing them to a restaraunt to eat for at least two months. We’d had enough. We told them that eating out was a privilege and that the food we were eating cost money. We also told them that Daddy didn’t get a day off work very often, and we were not going to spend it listening to them fight and whine. If they were going to behave that way, we would go home and spend Canada day cleaning the house (which was already clean… but whatever, I had to threaten something). They did try harder, but I could see that they weren’t going to do well at a huge crowd gathering, being over stimulated until all hours of the night. Besides that, the entire city filled with smoke from the fires raging in Northern Saskatchewan. Weird. It looked and smelled like the city itself were burning up! We made the decision to spend the rest of Canada Day at home.

I stopped by our local craft store and picked up some glow sticks, and then (while at Wal-Mart) we found this super fun slip ‘n’ slide on sale for less than $10. We knew it would be something the kids would LOVE (and they had been trying extra hard to be good after our ‘talk’). We brought it home, set it up and spent the afternoon playing on it. Boy, was I ever tempted to get on it myself – fortunately my husband reminded me that it’s for ages 4-12 only. 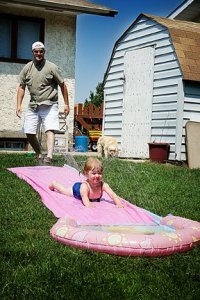 The kids had an absolute blast, and we had just as much fun watching them. I haven’t heard so much giggling in a long, long while. It was a great way to beat the heat in our own back yard. 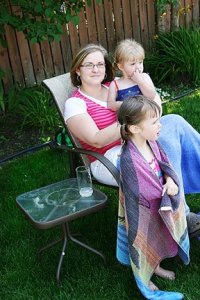 With our kiddie pool, the slip ‘n’ slide, and our sprinkler, the kids have their very own waterpark in our back yard. AWESOME! That’s not going to stop us from heading out to one of our local spray parks this afternoon, though. It’s going to be a hot one today!

Hope you’re week has been awesome! And happy 4th of July to all of my American friends!